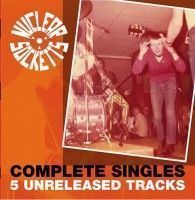 The Nuclear Socketts formed in King's Lynn, Norfolk in April, 1979. At their first gig later that year, John Peel was in the audience. He became an immediate convert and would later give the band considerable airplay. The band released two singles in 1981, the first of which was the "Honour Before Glory' EP, released in January. It made No.1 in the King's Lynn chart. It was so successful that the band started their own label Subversive and released records by Reality, European Toys and Section A. In March, 1981 the band appeared as part of the John Peel Roadshow at Lowestoft College. The gig was recorded and the track iot Squad' from the show was released as a flexi disc. August saw the release of the lay Loud' 7". It was a favourite of John Peel and he would often open the show with it. In the same month the band recorded a John Peel session with ex-Mott The Hoople's Dale Griffin. Both singles are highly sought after amongst 70s punk collectors and killed-by-death fans. A third single was recorded at Trident Studios, London in March 1982. The A-side was "900 Days' b/w I'm Alive', the former is a rewrite of an any earlier composition "Bully Boys', the latter an updated faster version of retender's Zeal' with a different guitar solo. The band had run out of money and had hoped that a bigger independent label would release it, but after several months and no success the impetus had been lost and the band disbanded the following year. "The Complete Singles' compiles their two singles, their live flexi, the previously unreleased third single and two studio demos, limited to just 300 hand-numbered copies on orange vinyl.