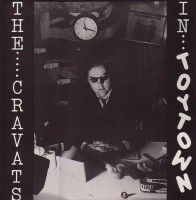 Repress! The Cravats were thrown together in 1977, the day after Robin Dallaway ^ The Shend had seen The Stranglers in Birmingham. After a few line/up changes they went to Outlaw Studios in Birmingham to embark on what would eventually turn out to be their first single ordon'. The band didn't have a clue what to do once inside the studio so an in/house engineer took charge. In July 1978 armed with the results of the 6 hours in the studio, the band managed to borrow £400 from The Shend's Mum and got a thousand 7? singles pressed.At on one of John Peel's Wingdings in Stratford Upon Avon The Shend gave Peel a copy of the ordon' single resulting in the record getting played that night, and securing a session for his radio show.Pete Stennett was running his record shop&label Small Wonder, when one day a suspect package came through his door. The contents were one white label pressing of the ordon' single, Pete liked the record so much that he picked up the remaining copies for his Small Wonder label, he then booked the band into the studio with producer Bob Sargeant to lay down tracks for their first proper Small Wonder release.After the urning Bridges' and recinct' singles it was time to record an album. For one week in 1980 the band relocated to Torquay, recording The Cravats In Toytown album on an 8/track in a hotel basement. Released by Small Wonder in October that year, the album gained healthy reviews and made it into the Top 20 in the independent charts.This limited edition vinyl pressing reproduces the original album, the 12" x 12" 4/page insert, but with the bonus of an inner bag.