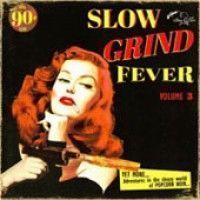 "Being a part time DJ whose fave musical period is the decade between 1953 and 1963 one can dig forever in a bottomless pit of great danceable uptempo tunes. Even after years and years of bringing new and exciting tunes to light there still are new finds every day who fill the dancefloors around the world for fans young and old. We're talking rhythm & blues and the phase in the early 60s when it morphed into soul (now called new nreed), as well as the genre that nowadays is labeled Popcorn - a mid-tempo style with a high groove-factor that was created in Belgium (of all places).The 'Slow Grind Fever' series was created after stumbling over a clubnight in Australia via the internet: Melbourne's only slow dance party, where they play the slowest, spookiest, sweetest records they can find, and folks dance real slow in a haze of smoke and dim red light.Well, what a concept! The Soundcloud-mixes the three DJs posted pretty quickly convinced the Stag-O-Lee chief that this is very exciting and after a few mails with the guys who run the Melbourne night the 'Slow Grind Fever 'series was born.TRACK LISTINGSide One: 1. The Notes - Cha Jezebel 2. The El Torros - Yellow Hand 3. Eddie Cooley & The Dimples - Driftwood 4. Isley Brothers With Ray Ellis & Orch. - Teach Me How To Shimmy 5. Donna Dee - Nobody's Gonna Hurt You 6. Charlie Williams - Playin Guitar And Missin You 7. Henry Thome - Wolf Bait 2:38Side Two: 1. Bob Lee - Wanted For Questioning 2. Little Willie John - Young Girl 3. Elizabeth Waldo - Balsa Boat4. Bobby Rebel - Valley Of Tears 5. Jessie Hill - My Love 6. The Flamingos - I Only Have Eyes For You 7. Jimmy Scott - Home