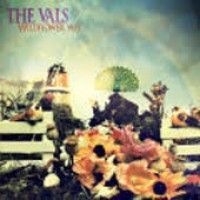 (+ Download) After their first single "Quiet Part Of Town" The Vals deliver the full length album "Wildflower Way" and carry the listener into a 60s suburbia galaxy."Wildflower Way" is the brainchild of songwriter Paul Doherty. Produced at his home studio in Belfast, the album flows through pop, rock, psychedelia, and folk, creating a supersonic carpet for the ears of the listener. Incorporating a vast array of instrumentation, The Vals explore tales of 60's suburbia in what is more of a storybook than a conventional album. Each song within the album has been twinned with beautiful artwork from Stefan Duerr, adding to the overall dream-like ambience of the album.While exercising experimental recording techniques often associated with the era of Sgt Pepper and Pet Sounds and with the addition of orchestral sounds through-out, tracks such as "No Truth in War" and "Quiet Part of Town" create an epic soundtrack. Skipping through a sea of musical genre, we encounter the occupants of "Wildflower Way" on tracks such as the dreamy "Suzie Reaches for the Sky", "Bellamy Only Dreams" and "The Ballad of Billy Milk". We are spun into another realm with "Paper Moon" which gives a nod to India with its beautiful sitar sounds before seeing the bluesier side to The Vals on the track "Mailbox". But it's on tracks like "Heaven and Earth" that the proverbial psychedelic egg has been laid, dreamy vocals backed with what sounds like a tub-thumping marching band provide yet another example of the diversity found on "Wildflower Way". A Pandora's Box of memorable and magical songs unleashed in 2014 by The Vals.

Dinosaur Jr
Give A Glipmse Of What Yer Not