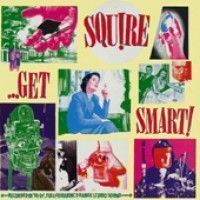 Released in 1983, Get Smart! was made when Squire returned to the live circuit after a sabbatic period. The album showed a more ellaborated production, and influences broadened after hours of listening to the LPs The Beach Boys "Today", The Beatles "Revolver" or The Byrds "Younger Than Yesterday". Sophisticated structures and vocal arrangements were brought in, and Meynell also added a high dose of Rickenbacker 12-string sounds. A horn section and a slightly psychedelic feel are present here and there, but the guys managed to keep the sound as fresh and fun as they are expected to."To some extent, Get Smart was planned as the album where we gave ourselves permission to indulge our fantasy of being proper recording artistes. The album was conceived as a whole and planned out meticulously from demo stage to final master. The project had started with Kevin and Jon, recording simple demos of all the songs with handclaps and guitar at my house, later going to a rehearsal studio to arrange the horn parts, provided by Stuart Prosser of Rye & the Quarter Boys, who Id met also selling his records into shops in Carnaby Street, like me!" - Anthony MeynellIf you like The Who, The Kinks, The Byrds, Big Star, The Jam, Secret Affair or The Chords, you'll love Squire!It comes with remastered sound and features a colour insert with photos and liner notes written by Anthony Meynell himself. Limited to 500 copies only.