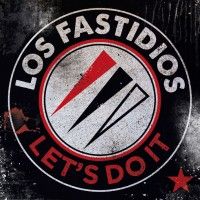 Five years after All'Arrembaggio album, Los Fastidios are back with the new full length record LET'S DO IT !!! Produced by Kob Records (the label of the Los Fastidios singer Enrico), LET'S DO IT is reflecting all the characteristics of the band, from the sound to the lyrics.The opener is the punkrock'n'roll glam anthem LET'S A.F.A. (an hymn to the Anti Fascist Action), followed by the 2tone ska hit SKANKIN' IN THE GHETTO (talking about the multiracial districts, the real heart of our towns) with special guest and good friend of the band De Veggent from Redska (italian ska punk band) on keyboards. You will find a touch of latin ska combat punk in the song EL PRESIDENTE (dedicated to Gigi Fresco, the President/Trainer, since 33 years, of the Virtus Verona, the third football team of Verona, known for its social engagement and for its antifascist supporters among them Los Fastidios, big fans of this team). The next song LAST PINT OF CIDER IN GLASGOW is about a famous Celtic FC pub in Glasgow, that was closed a couple of months ago after a couple of fights happened in front of it). The following danceable song is called CORRI RUDEBOY, 100% ska reggae, featured the famous italian reggae rude boy Vacca). WithANTIFA BOXER you get a melodic punk rock song, an himn for the all the antifa boxers (at first Lenny Bottai from Livorno) and Palestre Popolari (antifa gyms which being organized through Italy and connected with the Centri Sociali movement). With a tribute to the legendary Trojan Records, born in 1968 in UK, you get a trip to rocksteady sound in IN 1968 followed by tough ska punk with LA MIA VITA, a song dedicated to everybody living in a troubled life and DA FIGLIO A PADRE, a punk rock song messaging to those fathers and old activists to not leave their sons alone in struggles. With a cover of DIRTY OLD TOWN, a tribute to the Pogues and the Specials the record is coming to an end... A sad and melancholy moment in the album comes with the song THINK ABOUT THEM (talking about the suffering inflicted by the men to the animal world, the animal rights issue has always been present in the Los Fastidios themes).The last song of the record UNITI SI VINCE is a classic punk oi! screaming song about the union between young and old, from the streets up to factories to the terraces. That union Los Fastidios always sing for.....and then drink your cold beer and have a good listening !!!! Let's do it !!!

Hard Skin
On The Balls (picture)