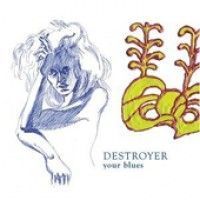 LP pressed to 180g & includes coupon for full album download . Your Blues is a stunning collection of songs and craftsmanship. Bombastic and bold at times, quiet and soothing at others, Your Blues has an almost theatrical quality that informs the compositions. Originally released on CD in 2004, Destroyer's sixth studio album is now widely available on vinyl, as the December installment in the Merge25 reissue series. Recorded with the production duo JC/DC (aka David Carswell and John Collins) -- who aided in the creation of Destroyer's first three discs -- Dan Bejar ditches the band format he used for 2002's This Night with tremendous results. Fusing a dramatic vocal style akin to that of David Bowie in the 1970s with 1980s studio achievers like Microdisney and Prefab Sprout, Your Blues is regularly breathtaking.