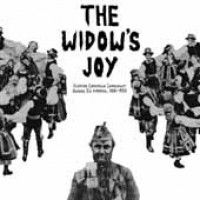 Sound American and Canary Records collaborate for 'The Widow's Joy: Eastern European Immigrant Dances in America 1925-1930', the first release of Sound American Records. Canary Records curator Ian Nagoski has crafted the ultimate Lemko party record as a labor of love for the forgotten music of the Austro-Hungarian diaspora in the midwest region of the United States. 'The Widow's Joy', with a cover by Mississippi Records' Eric Isaacson, features the music that helped immigrant coal workers and laborers from the Austro-Hungarian region of Europe and moved to Illinois, Ohio, and Pennsylvania to work, live, and dance. Built on the backs of these workers, America has forgotten a large part of their musical culture, which has been overshadowed by more indigenous musical forms like blues, jazz, gospel, and folk musics from Appalachia. In a bid not to supplant these rich musics, but to add more to the story, Nagoski has tirelessly scoured huge collections of seemingly lost and forgotten 78rpm records to rediscover and bring to light lost cultural gems like those found on 'The Widow's Joy' and his recent smashing success, 'To What Strange Place: The Music of the Ottoman-American Diaspora 1916-1929'.