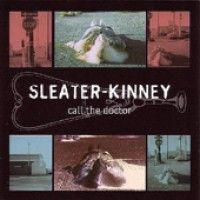 ."Call the Doctor" is Sleater-Kinney's second studio album. It was produced by John Goodmanson and released on March 25, 1996 by Chainsaw Records. The album is often considered to be Sleater-Kinney's first proper album because Tucker and co-vocalist and guitarist Carrie Brownstein left their previous bands, Heavens to Betsy and Excuse 17, at the time of its recording. The line-up featured Corin Tucker (vocals, guitar), Carrie Brownstein (guitar, vocals) and Lora Macfarlane (drums, vocals). "Call the Doctor" appeared at #3 in The Village Voice's "Pazz & Jop" critics' poll for 1996. In 2010, the album was ranked #49 in the list of the 100 greatest albums of the nineties by the editors of Rolling Stone. "Trades sex-worker role-playing, doll parts, gender-bending, and other common female-rock tropes for stories of everyday struggle [...] Sleater-Kinney proves that punk still offers new ways to say no" - Johnny Ray Huston, SPIN The album has been freshly remastered by Greg Calbi for this release.