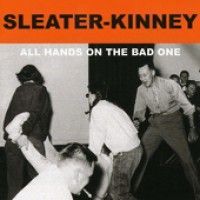 Sleater-kinney
All The Hands On The Bad One

.."All Hands on the Bad One" is the fifth studio album by Sleater-Kinney, originally released on May 2, 2000 by Kill Rock Stars. The album was produced by John Goodmanson and recorded from December 1999 to January 2000 at Jackpot! Studio in Portland, Oregon and John & Stu's Place in Seattle, Washington. Upon release, "All Hands on the Bad One" reached #177 on the US Billboard Top 200 chart and #12 on the Heatseekers Albums chart. "All Hands on the Bad One" appeared on several end-of-year lists and received a nomination for Outstanding Music Album at the 12th Annual Gay and Lesbian Alliance Against Defamation Awards. The Village Voice placed it at #10 in its 2000 "Pazz & Jop" Critics' Poll. "The band's most melodic, playful, sarcastic, and punchy album to date" [8.3 / 10 ] - Brent DiCrescenzo, Pitchfork The album has been freshly remastered by Greg Calbi for this release