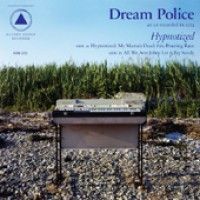 Dream Police is an American musical production by Nick Chiericozzi and Mark Perro. The project began in 2010 as a reservoir for ideas which had overflowed from The Men's drain pipe. In that same year, a two-song cassette single was self-released, with a follow-up live document in 2011. Most recently, the duo has conceived an LP with longtime sonic partner, Kyle Keays-Hagerman from late 2013 through early 2014. Although the production began using the most conservative rock n' roll devices, Chiericozzi suggested adding drum machine to the song "Pouring Rain," and everything changed. Over the next six months, the two Men and their collaborator Kyle Keays-Hagerman spent countless hours reshaping every song, constructing them from nothing. They obsessed over every tone, every part. They'd spend an entire day on one snare crack. The album slowly plumed into a cloud of future primitive psychedelia bursting with glimmering electronics and cinematic, vibrato storytelling. The result of that process is Hypnotized: something borne from The Men, but free of it. Dream Police are brutal, erotic and overlit