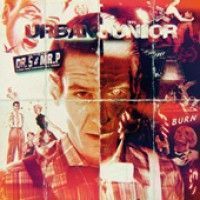 URBAN JUNIOR from (Aarau/ZSwitzerland started (belief it or not) in the boy group "H2O" then found out pretty quick that this is not his thing to do on this planet earth, so he bought himslef a KICKDRUM, a GUITAR and a KORG SYNTHESIZER and started traveling around as a ELECTRO PUNK ONE MAN BAND, the complete oposite of the boy group image he had. It's a twisted situation and so is the man himself, and so is that new Record of URBAN JUNIOR: a twisted Trip into a syntetic world of ELECTRO CLASH GARAGE PUNK, BLUES TRASH, 80'S NEW WAVE DISCO and RAW ELECTRO PUNK like nobody else can. URBAN JUNIOR plays shows in the whole wide world (on tour with JOHN SPENCER BLUES EXPLOSION, Bob log III, JOHN SCHOLEY, Jack Oblivian, on stage with OH SEES, King Khan, Pussywarmers, Reverned Beat-Man, etc. and has a growing followership. His live performances are a pure energy spettacolo, a one man FREAK SHOW. Imagine being a totally drunk fucking up at a ROLLER DISCO PARTY and the band hits song after song in your face...that's what an URBAN JUNIOR show feels like. On this record you here him in a conversation with Dr S and Mr P, the two personalities in the brain of Urban Junior. The album Includes 3 SUPER SMASH HIT SINGLES (Jetzt, Backdoor Boogie, The End) and a bunch of other OBSCURE KILLER ELECTRO PUNK Tracks !!!