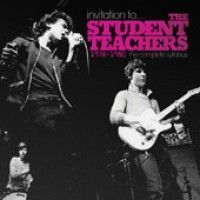 In the fall of 1977 at a John Cale concert at CBGB the opening band was the Mumps. Sitting in the front row was the president of their fan club, Bill Arning. He was 16. A couple of other teenagers named David Scharff and Phillip Shelley, who came in from the suburbs to see Cale, arrived early to get good seats. They sat at the table next to Bill, and ended up befriending him. A week or so later they saw each other again, this time at a Patti Smith poetry reading. Bill was accompanied by his friends Lori Reese and Michael Alago. They became fast friends. Soon they were planning what shows they would see, and when they would see each other. Bill and David used some saved funds to sponsor rehearsals, second hand instruments were purchased for Phillip and the Girls, and they started taking lessons from the guys who rented them their rehearsal space. Songs started spilling forth - "The Quake" based on the religion of the Quaker school that Bill and Laura attended, "Captain Kelly" about a failed fire alarm, "Zero Cool" inspired by Roddy McDowell's catch phrase in the hipster cult film "The Cool Ones," "Realworldfun" about being submerged in the world of kitsch television reruns, "Channel 13" about the surreality of everyday life, "We're All Damaged" about exactly what it sounds like, and "Christmas Weather," about a real-life car accident that the band survived together on the way to Max's Kansas City. If you want to know this exciting band, Rave Up/Backstreet is proud to offer you an album with great original 1978-80 studio recordings. Be fast, only 400 copies available!!!