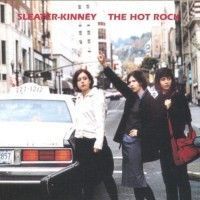 "The Hot Rock" is the fourth studio album by Sleater-Kinney, originally released on February 23, 1999 by Kill Rock Stars. It was produced by Roger Moutenot and recorded at Avast studio in Seattle, Washington in July 1998. The Hot Rock reached #181 on the U.S. Billboard 200 chart and #12 on the Heatseekers Albums chart, becoming the first Sleater-Kinney album to enter the charts. "The Hot Rock" appeared at #23 in The Village Voice's "Pazz & Jop" critics' poll for 1999. Similarly, Spin placed The Hot Rock at #18 in its list of "The Top 20 Albums of 1999". In 2002, Rolling Stone ranked the album at #17 on its list of "Women in Rock: The 50 Essential Albums". "The expansive new sound gives Sleater-Kinney room to experiment with their Husker Du-style storytelling. They've earned the right to keep reinventing themselves". - Rob Sheffield, Rolling Stone "Tucker explores what her voice can do when it's not in overdrive, stretching vowels like a religious supplicant or spewing prosody like Patti Smith. At the same time, Brownstein blossoms as a singer herself [.] braiding lines with Tucker so artfully the result sounds like the voicings of a single restless mind". [Grade: A] - Will Hermes, Entertainment Weekly The album has been freshly remastered by Greg Calbi for this release.