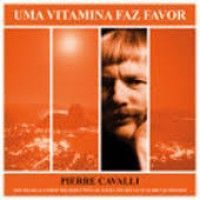 Brazilian-tinged jazz and funk from Switzerland/ Italy 1972-75, recorded by European guitar legend Pierre Cavalli with the ensembles of music masters Angel Pocho Gatti and Bruno Spoerri - all original material, previously unreleased. Library- and Soundtrack-like album full of bossa breakbeat tunes, scat funk, jazz fusion and trippy interludes - with acoustic or spacey electric guitars, latin flutes, vibes, fender rhodes plus occasional vocals. 14 lost tracks transferred from a test pressing and tapes found in the archives of Nanda Cavalli and Bruno Spoerri, also featuring Renato Anselmi and Fernando Vicencio, remastered in 2014 for 6-page-dgipack-CD and limited vinyl LP.Vitamina De Brasil: The Brazilian "Tristeza" has already infected Europe in the early 60s, with the film "Orfeu Negro" and a commercialization of Bossa Nova. At the end of the decade Brazilian artists like Caetano Veloso and Gilberto Gil created Tropicalia, a synthesis of pop, rock, jazz and Brazilian music. Composer, guitarist and bassist Pierre Cavalli from Zurich traveled to Brazil in 1968 and stayed there for a whole year. Upon his return to Switzerland, he worked on recordings that should convey his musical impressions of Brazil. In 1971 Cavalli produced and played music in his hometown, mostly with his own small ensembles and as a studio musician. Some Brazilian-inspired instrumental and vocal tracks were recorded spontaneously with the excellent ensembles of Angel Pocho Gatti (Italy/ Argentina) and Bruno Spoerri (Switzerland), in various studios and for advertising purposes only. Some of the recorded music was used in local TV advertising or appeared on a vinyl LP for the promotion of an airline, while the remaining tunes were put in the vault immediately after production. The final result is this "lost" and newly mastered album by Pierre Cavalli, released here for the first time ever.