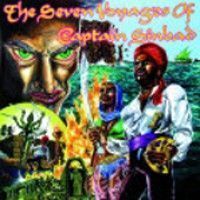 1982 album re-issue with original artwork. 'The Seven Voyages Of Captain Sinbad' was is the debut album for the deejay Captain Sinbad (alter ego of the Jamaican record producer Carl Dwyer). The artist entered the music industry on the Sound of Silence sound system, which at the time also featured Sugar Minott. He recorded as well for Dillinger's Oak label, but it was producer Henry 'Junjo Lawes and the musicians of the Roots Radics, with Scientist & Soldgie at the controls of the Channel One Studio, who realised this classic longplayer with the significant artwork by Tony McDermott. The used Riddims include classics like Shank I Shank, Soloman, Cuss Cuss, Things And Time, Bobby Babylon, Hunter Man.