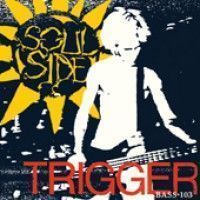 In 1985, a younger punk scene was emerging in Washington, DC around Sammich Records, a label co-founded by Ian's younger sister, Amanda MacKaye. The label's first release was a split 7" EP called Thanks. One side featured Mission Impossible, a band from Arlington, Virginia with Dave Grohl - then a high school freshman - on drums. The other side belonged to a new band out of Wilson High School, Lunchmeat. Not long afterward, Lunchmeat - singer Bobby Sullivan, guitarist Scott McCloud, drummer Alexis Fleisig, and bassist Chris Thomson - switched its name to Soul Side. Within a year, Soul Side would become one of the strongest voices in the DC punk's third generation, alongside groups like Swiz and Shudder to Think. After completing a self-titled full-length - also released on Sammich - Thomson parted company with the band and Johnny Temple joined on bass. In December, 1987, the quartet booked time at Inner Ear Studios with Ian MacKaye and Don Zientara and recorded the eight song TriggerEP, Soul Side's debut release for Dischord Records. Though Soul Side initially played music that emulated the fast and heavy sound of their DC forebears, Triggerfound the band evolving a more unique style, with oblique song structures and a strong reggae and hip hop influence in the rhythm section. Informed by the progressive punk culture of Revolution Summer, Sullivan's lyrics also became more politically conscious. This release compiles Triggerwith the band's three-song single, Bass103, both of which have been out-of-print on vinyl since the early '90s. The record has been remastered for vinyl by TJ Lipple and includes updated artwork by Jason Farrell.Soul Side would record one more album, Hot Bodi Gram, for Dischord before disbanding in 1989. Members went on to perform in Girls Against Boys, Rain Like the Sound of Trains, Rain, and Obits along with other bands.

Mary Monday
In The City

Inocentes
Garotos Do Suburbio - The 1985 Demos