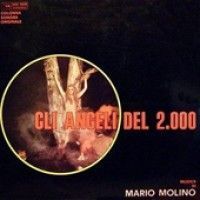 Wow! We are very happy to bring back to light this fantastic soundtrack by one of the most underrated Italian musicians. It is well known the rich musical heritage that the Italian film industry has left us, and all those who enjoy the likes of Ennio Morricone, Alessandro Alessandroni, Piero Piccioni, Piero Umiliani, Riz Ortolani, Armando Trovajoli et al. will welcome Gli Angeli del 2000 to their collections. If you are into soundtracks or library music you probably already think that even if not as prolific as some of the aforementioned classics, Mario Molino's name deserves to be also on the list since he was behind a number of albums that contain little gems such as 'Operazione Beat', 'I sogni del mare', 'Lamento Beat' or 'Bossa Jaguar' and also thanks to his guitar playing in works by other masters like Marcelo Giombini or even Mikis Theodorakis.Gli Angeli del 2000 is a 1969 flick directed by Honil Ranieri that has all the drug, sex and counter culture ingredients of the era but which had very small distribution when first released - it was probably better distributed its photonovel version rather than the film itself!