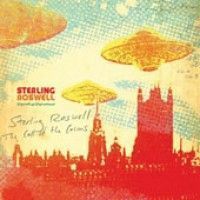 Roswell, Sterling
The Call Of The Cosmos

The former Spacemen 3 drummer and multi-instrumentalist self-released and sold out of a limited run of 300 copies of the album earlier in the year to great acclaim, including a rave review in Mojo and it was album of the month in Rough Trade Shops who described the album like this: "Lavishing in pop structures but drawing in myriad influences to the wondrous black hole, The Call Of The Cosmos features some shimmering spaciousness but also sleazy exotica-themes, not unlike a Lee Hazelwood production infected with Joe Meek's ghost. Roswell's own songwriting and voice recalls a solar-fried Bobby Gillespie, an artist he no doubt originally influenced with the Spacemen 3. Elsewhere, there's truly psychedelic excursions into outsiderdom which come off like The Seeds mutating ever larger into lysergic-dipped monsters." The Call of the Cosmos features the singles 'Interplanetary Spaceliner','Give Peace Another Chance' and 'a remix of The Girl From Orbit', cementing the elements which have infused Sterling's work since his days with Spacemen 3, his multi instrumental driving force behind The Darkside and his innovative psychedelic soundscapes as a studio engineer and producer.

Low Frecuency In Stereo, The
Futuro