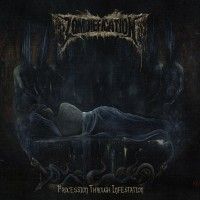 ZOMBIEFICATION has the rare chance to be both an already confirmed act within the death-metal realm while at the same time being still a bit of an outcast. Maybe this had something to do with the fact that they were until recently just a Mexican duo confined in a studio where they already churned out two great albums - 2010's 'Midnight Stench' and 2013's 'At the Caves of Eternal' - plus one equally-storming EP ('Reaper's Consecration'). Or that their style is both familiar and alien somehow as it fuses the classic Swedish sound of the early 90's with the occult obsession and epic structures typical of their national scene. But for their brand new full-length, and first released under the DOOMENTIA banner, they've decided to upgrade their game and take the whole thing to the next level. Once again recorded in Mexico and mixed in Stockholm by Tore Stjerna from the famous Necromorbus studio (of Watain fame among many others) 'Procession Through Infestation' is probably their most atmospheric work so far. Even if death metal has rarely been this dark, there are still darker melodies to be found here. While still extremely brutal and featuring Mr. Hitch (who also takes care of both the artwork and the concept) demented vocals, throughout its eight tracks, it takes the listener to a dark and damp place, where the damned eat the soul of the recently departed and where no life dwells. As for its striking cover art, it represents the Ghede, an infamous character from the voodoo tradition that represents both fertility and death. "They've always existed in every field, time and culture yet under different names" underlines Mr. Hitch. "Both them and the Zombiefication process are forever linked to voodoo practices and religious beliefs and also include fetish, snake cult, ritual sacrifices and trance as mediums to communicate with all kinds of deities, both from a monotheistic or polytheistic point of view