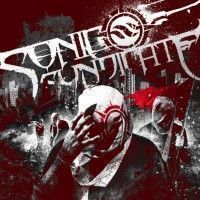 SONIC SYNDICATE's first album, Eden Fire (2005) saw the band rise from the intrepid Swedish underground, but it was their stunning debut under Nuclear Blast records with Only Inhuman (2007) that changed the band from promising contenders into one of the most revered heavy-weight fighters in the game. Their next effort, Love And Other Disasters (2008) pushed the bar even higher. Together with relentless touring with bands like AMON AMARTH, IN FLAMES and NIGHTWISH eventually cemented their status as the hottest new band around (Winning Best Newcomer, 2008 at both the Swedish Metal Awards and the Bandit Rock Awards). Since Nathan J. Biggs joined the band in 2009 the winning streak only got more impressive (Grabbing Best Music Video for 'Burn This City' and Best Swedish Group, 2010). The following year heralded SONIC SYNDICATE's most diverse and unique work to date, We Rule The Night (2010). The album accompanied by an elaborate worldwide marketing campaign, resulted in not only the first single, 'Revolution, Baby!' selling Gold in Sweden, but also led the band to their most extensive tour to date - travelling and destroying stages all over the globe for a massive two years. This eventually climaxed with an unbelievably memorable performance at Summer Breeze Open Air Festival (2011) in front of over thirty-three thousand people. After almost twenty-eight million YouTube views of the band's official music videos, and constantly being either on the road or in the studio, the band decided to take an extended break for the first time since its incarnation. The hiatus gave them chance to breath, recuperate and try an approach to songwriting they have never done before. Two years later, SONIC SYNDICATE is back! Ready to hit the studio, Jan 2014 with renowned producer, Roberto Laghi (IN FLAMES, HARDCORE SUPERSTAR, MUSTASCH) with an album that is going to blow both people minds and speakers, promising to be brutal and brilliant. Going back to their roots, the self-titled album is not only a cathartic but also more heavy sound experience. Commented guitarist, main songwriter and founding member, Robin Sjunnesson: "We decided to go with this one as a "Self-Titled" release. Mainly because as an album we have put everything we've got into it. All of our experience as musicians, the evolution of the music, the sound from all eras of the band, and also the road we have taken as people. This is us, this is Sonic Syndicate in all its beauty and destruction. It shows our strength, our love for melody, our scars, our energy. The cover art is a definite representation of that. In the background, a battle-torn city laid to waste, four figures emerging together with only each other to depend on in an environment so harsh, only those with a tough heart, body and soul can survive. The tone throughout this album is definitely darker, and as my Swedish family would say "With a red-line running in the middle" so we put this into the colour-scheme. We could not be more proud of this album, and we thank our fans for the support, it's because of them that we're here. This album is for you." Sonic Syndicate will also feature a guest appearance by SOILWORK's gifted vocalist Bjorn Speed Strid on the track 'Before You Finally Break'. Commented singer Nathan James Biggs: "I'm honored to call Speed a friend. I've been a big SOILWORK fan for years. Those guys were a massive hand in crafting that trademark Swedish sound so it made perfect sense to ask Speed when we knew we wanted to do a song with guest vocals. Performance wise I think we have similar styles and execution, but at the same time we both have our own thing going on so the voices compliment each other to great effect. My idea was also to have a real battle between our vocals. I hate it when you have these "featuring" songs and the guest just pops up for a chorus and then does backing vocals for a while in the verse or something. This is a real fight between us for the mic and I'm sure people are gonna appreciate that."