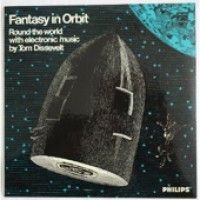 Even before the landing of men into the Moon or any Space travels, majestic Ignition captured the essence of thespace mood and Science Fiction esthetic. Fantasy in Orbit contensthe blueprint for a future sound, later recognizedas Electronic Music.The music is this jaunty space age swirl, with synthetic oscillations and bubbling textures, creating what is onemoment playful, the next menacing, as they struggle reign in the beast that would become electronic music. You canhear everything from bachelor pad exotica to avant-garde electronics, and even a primitive precursor to acid house.Its all here. As a side note its music that couldve been the soundtrack to 2001 A Space Odyssey, as Stanley Kubrickrequested the music for a new space project he was working on. The duo had never heard of him so they ignored theletter. The vibe is tremendous and vita. Proto-so-many-things. Its a relic of electronic music,Limited edition of 300 units.