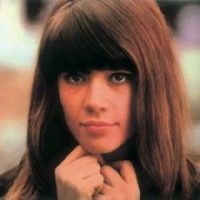 Growin' up in the 9th arrondissement of Paris, daughter of an unmarried mother, receivin' a guitar on her sixteenth birthday as a reward for passing her baccalaureat, Françoise Hardy answered a newspaper advertisement looking for young singers she signed her first contract with the record label Vogue in November 1961. In April 1962, shortly after finishing school, her first record "Oh Oh Chéri" appeared, written by Johnny Hallyday's writing duo. Her own flip side of the record, "Tous les garçons et les filles" became a success, riding the wave of Yé-yé music in France, with two million sales. Françoise Hardy Canta per Voi in italiano: an album issued shortly after the debut with some of its songs and additional numbers re-recorded in Italian. While the original album is a classic of French pop, 0s AM magic, and of course a forerunner of the yeh-yeh (aka yé-yé) sound, the additional tracks in Italian are a sweet counterpart. A numbered limited edition of 500 copies pressed on Audiophile Clear Vinyl (ACV).