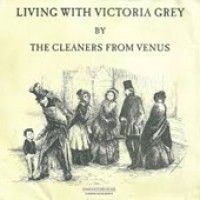 The late summer of 1985 was a rather pleasant one for Martin Newell. Now past 30, and sick of being at odds with the London music industry, he decided to give up - not music exactly - but any attempt to make a living from it. Though Newell and hsi new musical partner Giles Smith continued to casually record and "Under Wartime Conditions" continued to pick up good reviews, including one in the UK's Sound magazine, there was no intent to continue on. Yet it was due to this sporadic period of recording that the Cleaners came to, quite non-chalantely, release the cassette "Living With Victoria Grey". After sending the nearly unmarked cassette to a few fanzines and selling the cassettes for $2 apiece (or even giving them away), Newell once again forgot about music until a young man named Andy McQueen offered Newell an interesting deal: though there would be little money, he and Smith could record a high quality Cleaners record without the interference of a producer. The two began working on "Going to England". Although 7 of the songs from "Living With Victoria Grey" would appear on the album, the cassette was all but forgotten, the only master copy having been lost. It wasn't until almost 10 years later that Newell was approached by a man he'd never met before who said , "You sent me this, many years ago and told me to look after it. I did. I thought you'd like it back now.". It was the master copy of "Living With Victoria Grey". Over 10 years after it's intial, quiet release, Captured Tracks are pleased to present "Living With Victoria Grey" on vinyl for the first time as part of the final installment of the Cleaners from Venus collection.