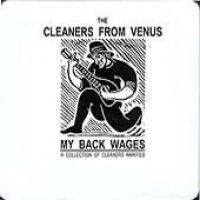 Considered the "last ever" Cleaners From Venus release, "My Back Wages" is comprised primarily of songs written in 1992 while Martin Newell was quarantined with the Chicken Pox. While some songs made it onto Newell's " The Greatest Living Englishman", many fell into obscurity, never to be released. That is until some 8 years later when long time Cleaners supporters JAR Music Germany, a small DIY label, released a collection entired "My Back Wages". Newell claims to have had no knowledge of the release, but the punning title of the album has his paw prints all over it. After spending the years between 1992 and 2000 focusing on his writing, poetry and gardening, and when the release surface in 2000. Newell had little recollection of even sending the songs to his friend at JAR. When Newell heard it, he was surprised to find that musical additions had been made to the tracks, which polished up his spontaneously and sometimes sloppy recording style. Newell felt touched that anyone would be interested, or even care about something which he'd regarded as a rag-bag of demoes. Converseley, as a natural musical anarchist, the idea that anyone, anywhere, considered that they knew better than he did, annoyed him. This version of "My Back Wages" as issued by Captured Tracks, therefore is martin Newell's own producers cut of addities, out-takes and 'orphan songs'. "Crane Drivers" for instance, was made after a friend with a brand new Roland U20 keyboard, lent it to Newell for two days, challenging him to make a complete song using only the sounds contained whithin its pre-sets. "Haunt Your House" was a demo written for The Damned, who were short of songs for an album at that time. It was never used. Over 20 years later, Captured Tracks are thrilled to give Newell the chance to release this material on his own terms and put the Cleaners to rest once and for all.