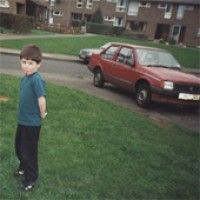 Heavyweight Vinyl LP + MP3. Hailing from Pity Me near Durham, vegan straight-edge pop group MARTHA have just signed to Fortuna POP! Providing energetic, impassioned pop punk, Martha are informed by 90s indie rock and Scandinavian anarcho noir. The album, produced by MJ from Hookworms, is laden with harmonies and interchangeable vocals whilst still retaining the energy and excitement of the bands live shows. Formed in 2011 by siblings Naomi (bass, vocals) and Nathan Griffin (drums, vocals) with J. Cairns (guitar, vocals) and Daniel Ellis (guitar, vocals), Martha have fast become a staple of the UK DIY pop scene.. Decamping from the North East to record the album at Suburban Home Studios, Leeds, the band enjoyed the freedom of being in the studio and experimenting with MJs equipment to produce unexpected sounds. Taken from a line in the song Gin and Listerine, the album title "Courting Strong" is an expression that was used to describe couples who were getting really serious. Theres the old clich that when youre young you think youre invincible and that everything will last forever - the album is about looking back and reflecting on past moments in your life, past friendships and relationships, accepting the uncertainty and fragility of those things and moving forward positively. The overarching theme of the album is growing up weird. Its a semi-autobiographical story about growing up in a small town, with a sense of not fitting in but on the way finding people who share that feeling and forming really strong bonds. Its an album for the people who stayed in their hometown, and for the people who still go back and visit. Marthas melodic punk pop celebrates being an outsider whilst being part of a community. The album touches on uncertainty, fear and loneliness whilst exuding an effervescent sense of excitement and joy. Theres darkness beneath the pop surface - but there are also songs about teenage antics, drinking, courting and having your heart broken.

Martha
Blisters In The Pit Of My Heart