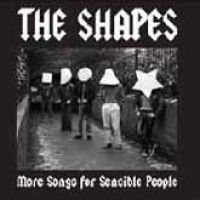 A collection of musical ditties by punk-pop band The Shapes, who hailed from Royal Leamington Spa in the UK. During their brief career The Shapes released two singles, the first being the 'Part Of The Furniture' EP, freleased on their own Sofa Records label in early 1979, which featured perhaps the most memorable songs that the band composed, namely 'Wot's For Lunch, Mum? (Not Beans Again)' and '(I saw) Batman (In the Launderette)'. In 1980 The Shapes finally released their follow-up single, a double B-side featuring 'Airline Disaster' b/w 'Blast Off!' on the infamous Belfast-based Good Vibrations Records. History relates that this release did not do quite as well as the band had hoped, despite their loyal fanbase. Sadly, the scene has moved on, and thus their story came grinding to a halt.