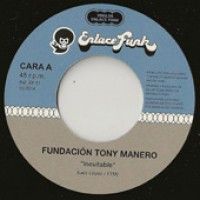 The oldest Spanish black music band.Six albums and one of them even sold gold.New album out on September 2014.Fundación Tony Manero is one of the oldest spanish black music bands dedicated mainly to disco but capable of playing almost any genre from funk to latin. They have been around since 1996, released six albums and even went gold with one of them. After a stint of five years since their last album "Pandilleros" they are now back with a new record infected with lots of boogie and 80's synthesizers. "Superficial" is its name and it will be released in September 2014 but now you can get an advance in this Vinilos Enlace Funk seven inch. Put on your boogie shoes!TRACKLISTSIDE A "Inevitable" SIDE B"Despacio"

Little Tommy & The Elgins
Never Love Again/ I Walk On