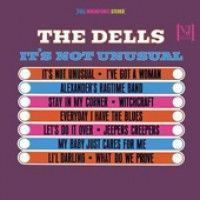 Dells
It's Not Unusual

Limited Edition release replicates the original 1966 album on heavyweight vinyl and includes the R&B hit "Stay In My Corner" alongside popular Jazz and Pop standards. This release commemorates the 60th Anniversary of legendary Chicago independent Vee-Jay. Formed in the Chicago suburb of Harvey in 1952, The Dells were one of the best-loved and longest-lived of all the Rock'n'Roll era vocal groups and, unlike many of their peers, they managed to retain very nearly the same members throughout a six decades-spanning career. Their 1966 Vee-Jay album "It's Not Unusual" reveals just how broad their repertoire was; released on the cusp of the label's demise, The Dells had only recently registered an R&B Top 30 hit with "Stay In My Corner" and were touring as Ray Charles' short-lived support act. The Dells signed to Vee-Jay in 1955 where they scored a minor local hit with "Dreams Of Contentment' but 1956 yielded a bone fide Doo Wop classic in the shape of R&B Top 5 hit "Oh What A Nite". They toured with Washington for two years, recorded back-up for Atlantic's Barbara Lewis and subsequently returned to Vee-Jay to record in an R&B vein, although their nightclub show continued to focus on jazzier/MOR material as is evidenced by this album. Inducted into the Rock'n'Roll Hall of Fame in 2004, the 1960 line-up was still performing up until the death of Johnny Carter in 2009. Junior Marvin passed in May 2013.

Clark, Dee
How About That

Korner, Alexis
R&b From The Marquee