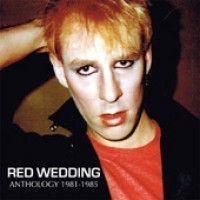 Red Wedding debuted at the Brave Dog on Saturday, June 13, 1981. Fans expecting a revamped Hey Taxi (the original punk incarnation of the band) were in for a shock. Gone was the angry and fast-paced power punk, replaced with mysterious, trance-like electro-glam rock. Gone was Louie Dufau, replaced with a drum machine. Gone was the punk attire, replaced with ruffled tuxedo shirts, makeup and earrings. And in the biggest transformation of all, gone was Michael the hyperactive clown, replaced with Michael the dark and aloof doomed romantic. Primarily because of their glamorous look and exotic apparel, Red Wedding was immediately labeled New Romantic, a term the band neither embraced nor rejected. In June of 1982, Red Wedding recorded [close] their first EP entitled "Up and Down the Aisle." In September 1984, Red Wedding recorded their second EP, "Nails." It was produced by Leslie St. James and recorded in both San Diego and L.A. For this EP, Red Wedding decided to focus on their darker, homo-erotic material, although it was decided to delete the most blatant homosexual passages used in the live version of the song "Bernardo." "Nails" was released in late October of 1984 on Important Records. In March of 1985, Red Wedding recorded four songs (including "Fiction Theater," the first song Spider and Michael had written together back in 1975) for their third untitled EP. Produced by Ed Grundman and Rick Hart, this was by far Red Wedding's best and most important work, but the EP was never completed. In May of 1985, Red Wedding gave its final performance playing at the Spirit Club down in San Diego. After four years with no interest from a major label, frustrated with having to deal with the jaded Hollywood scene, and burnt out from drugs and alcohol, Red Wedding called it quits. Right now, after many years, youve a chance to listen the best selection of this true cult band of the 80s!!!!