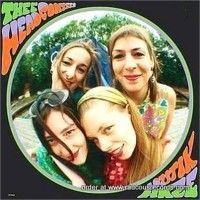 Back in stock. Get your Headcoats on again. Cos it's time for four re-issues of long lost THEE HEADCOATEES albums that were originally released on Vinyl Japan in the 1990's. THE HEADCOATEES were Holly Golightly, Ludella Black, Kyra Rubella & Bongo Debbie, they released seven studio albums, a singles compilation and a split live album with Billy Childish's THEE HEADCOATS. After the split Holly Golightly went on to release 13 solo albums and too many singles to mention, plus notable guest appearances on records by ROCKET FROM THE CRYPT, THE WHITE STRIPES and MIKABOMB.

Headcoatees
Have Love Will Travel