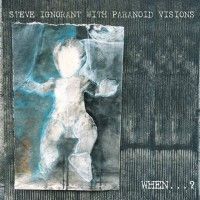 Ignorant, Steve With Paranoid Visions
When...?

ewind to 1979. A 13 year old punk kid called Peter in Dublin is reading the response from a letter he had sent to the biggest punk band on the planet, Crass. The letter, signed by Steve Ignorant answers questions and includes badges, leaflets and bizarrely enough, a recipe for bread. It proved to the teenager that Crass were indeed the real deal, that they maybe superstars selling more records than AC/DC, but they are ordinary approachable and accessible people. "Some day, Ill make a record with this bloke" said the teen.Ok that last bit is nonsense, no matter how accessible Crass were, making a record with one of them was just too far-fetched to imagine.However a couple of years later himself and like-minded Crass fanatic vocalist Deko Dachau founded the now legendary and seminal punk pack band Paranoid Visions . Having played and consistently released new material for over 30 years, the band reached a critical and commercial peak in 2012 managing to hit the top ten in the Irish charts with two singles and having the subsequent album Escape From The Austerity Complex being hailed as: "the best punk rock album in years"Fast forward to 2010, the aforementioned Steve Ignorant is touring Crass material for one last time and Paranoid Visions have been picked as a support act on several shows including the concluding show at the Shepherds Bush Empire. After the show, the band approached Steve about singing on one of the tracks being recorded for the bands Escape From The Austerity Complex album (released Sept 2012)and for a single Louder Than War records (released Nov 2012) had proposed.Inspired by the results and the overwhelming reaction to both tracks Steve Ignorant and Paranoid Visions decided to record an album of similar material. The result is When.?, a hybrid of styles, all with a nod to early 80s anarcho-punk (the LP version is enclosed in a beautiful Crass style sleeve). Recorded over a few months in the bands own FOAD studios, Steve was recorded in the manner that he likes best, ("a bit like recording Stations. Get in, get it done, get out before closing time") and the results retain that frantic aggression and power whilst retaining Paranoid Visions anthemic trademarks. Already described as "the best stuff Steves been involved with since side one of Christ the album" and "like Flux playing UK Subs songs", its an album that deserves a listen from anyone with a passing interest in the genre.

A-heads
Ash To The Soil