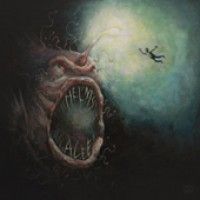 The Seattle trios unique amalgam of metal, art rock, pop and punk is charmingly reminiscent of the fertile creativity that groups once had before the Internet seemed to instruct bands to only copy one another. Helms Alees third album, Sleepwalking Sailors sounds like many styles combined into one, and none of it concerned with any notion other than creating vital, urgent and uniquely characteristic music. Bassist/vocalist Dana James, drummer/vocalist Hozoji Matheson-Margullis and guitarist/vocalist Ben Verellen combine a vast array of ideas within a single song, while still sounding entirely cohesive. Their songs are undeniably heavy, but also freely roaming through icy post-punk and warm melodic haze at any given moment. Any given song can be pummeling one moment and then subtly shift into triply harmonies without the listener even realizing what has happened. Sleepwalking Sailors was recorded with engineer Chris Common (These Arms Are Snakes, Pelican, Chelsea Wolfe) in Seattle, and marks the bands first release for new home Sargent House.

Horda Profana
Beyond The Boundaries Of Death

Kinski
Down Below It's Chaos (2xlp)

Omission
The Unholiest Of Them