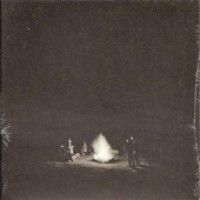 EP comes with 12-page B&W photo album insert featuring unreleased photographs from the recording sessions by photographer Kevin Faulkner. While holed up in a house in upstate NY, The Men took full advantage of their rural surroundings, in-house studio, and lack of recording timelines and obligations. They tracked over twenty-five songs. On top of that they also managed to record five songs acoustically, while sitting around a campfire outside the house. Before 2012 was over they had recorded an entire full length. To say this band is prolific is an understatement; they are teeming, borderline prodigal even. Two of these acoustic jams are alternate takes from the album, "I Saw Her Face" and "The Seeds". The plugged-in verison of "Water Babies" appeared on the b-side of their January 22nd 7" (SBR078lp), "Patience" and "Turn Your Color" are two entirely new beautiful tracks that highlight the band's ability to be as gentle as they are commanding.