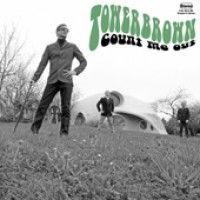 TOWERBROWN, founders of the "rhythm'n'blues organisation" and one of the leading suppliers of the big, fat Hammond beat return with a bang!Four years and two sold out 45s ("Let's Paint It Brown" and "I Wanna Know") after they first started, the french foursome will finally release their debut-album "Count me out" this late summer. Heavily influenced by american r'n'b and soul, british beat and the wylde and weird Hammond organ jerk, the four frenchies invite you to a journey through time back to the Swingin' London era of the sixties.Their authentic Hammond drenched rhythm n' blues made them one of the highly gathered top combos of today's transworld sixties garage-beat scene,which their performances at worldwide renowned clubs and festivals where they shared stages with bands like the MORLOCKS, the MESSER CHUPS, ALICE RUSSELL, The LOVE ME NOTS, THEE OH SEES, The A-BONES, DC FONTANA and The CYNICS prove impressively. "Count me out" is a groovy little masterpiece of classic 60's beat in the tradition of bands like the SMALL FACES, the ARTWOODS, the SPENCER DAVIS GROUP, THEM and BRIAN AUGER. 10 Tracks of pure hipshakin' entertainment, combining the very best of traditional blue eyed soul, r'n'b, freakbeat, instrumental spy sounds and of course yy beat, that will certainly not just take the hearts of the international 60s Garage/Mod/Soul scene by storm.Let's have a martini!

Chicos, Los
We Sound Amazing But We Look Like S

King Jartur & His Lords
Up In The Battlement