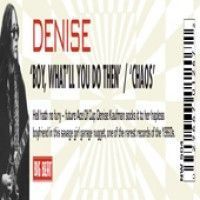 Denise
Boy, What'll Do Then/ Chaos

Big Beat kicks off a projected series of 7" vinyl to excite even the most hardened collector of 60s garage rock. Weve got a bevy of exciting two-siders in the pipeline all showcasing killers that are either unavailable on vinyl or so rare you need a second mortgage to even think about owning them.All come packaged in brown paper sleeves with individual stickers (see above).For this first salvo, we present three highly desirable artefacts including one that is not only one of the rarest singles of the 1960s, but the ultimate girl-garage nugget: Boy, Whatll You Do Then by DENISE. Denise Kaufman was a founder member of SF hippie mainstays Ace Of Cups but in this 66 stormer, hell hath no fury as the Berkeley wild-child lets loose on her then beau (reputedly future Rolling Stone editor Jann Wenner). The handful of original copies that have turned up, selling for in excess of $8,000, all feature an earlier, weaker take - our reissue utilizes the hyper-rare second mix, which is far more powerful.

Various
Girls With Guitars Take Over!

Seeds
Can't Seem To Make You Mine/i Tell Myself

Tiles
I Can't Sleep At Night/i Let Her Be