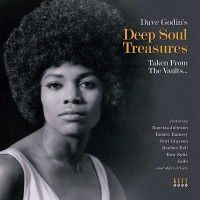 The Dave Godins Deep Soul Treasures series began life sixteen years ago. Some music lovers will remember where they were when they first heard the initial CD: it made that sort of impact. The last volume hit the shops nine years ago, just in time for Dave to see his final creation before his death - which he knew was imminent.Dave had notated all the sides he considered worthy of inclusion in his series and once some awkward licensing problems are cleared its likely a final volume will be issued, using mainly Daves own words to describe the music. In the meanwhile Kent are releasing a vinyl LP to keep Dave and the series memory alive; something we feel he would have approved of as it was his proudest achievement in a life that touched so many issues and people. There are selections from each volume: Dave thought each of his selections had equal merit. When a soul music website recently ran a thread on collectors personal favourites from the CDs, the results were as wide-ranging and sometimes contradictory as he would have hoped for. The tracks should be well known to converts and the main aim of the release is to freshen the series with an alternative format and presentation. Inevitably it will make an impact with some new music fans and swingers (copyright DG) who missed the first furore, possibly due to their tender years. For those lucky souls 100 blissful tracks lie ahead of them, minus this dozen, once theyve located a turntable.We at Kent stand by our preference for the digital format, when utilised properly, but vinyl quality has improved over the years too and the main benefit aurally here is in having located superior tapes since the CDs were first manufactured. Ruby Andrews Just Loving You is the harder-hitting mono mix as opposed to the stereo LP take. Jaibis You Got Me features an understated girl backing chorus that was not on the original 45. The sound quality on Rozetta Johnson in particular is improved through developments in audio mastering equipment, which, to a certain degree, applies to all of the tracks here. track listingSIDE ONE1.LIKE IT STANDS - Robert Ramsey2.ITS NOT THAT EASY - Reuben Bell & The Casanovas3.SONGS TO SING - Raw Spitt4.THESE FOUR WALLS - Irma Thomas 5.LOSIN BOY - Eddy Giles6.JUST LOVING YOU - Ruby AndrewsSIDE TWO1.YOU GOT ME JAIBI (Alt. Version)2.TRY LOVE - Dori Grayson3.IM SORRY I HURT YOU - Nat Phillips4.I DONT CARE ANYMORE - Doris Duke5.YOU MAKE ME FEEL GOOD - Lawrence & Jaibi6.WHO YOU GONNA LOVE (YOUR WOMAN OR YOUR WIFE) - Rozetta JohnsonThe gatefold sleeve uses only Daves original words to illuminate the listener but the extra space has given us the opportunity to add some relevant illustrations and memorabilia.180g coloured vinyl with heavy-duty card sleeve.

Exits
You Got To Have Money/under The Street Lamp