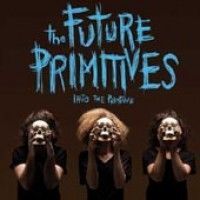 Cape Town didnt know what hit it when THE FUTURE PRIMITIVES formed in late 2011. From the first strum, this feral three-piece attacked in true GARAGE style with an unmistakable ROCKABILLY attitude mixed with an array of PSYCHEDELIC leanings drowned in SURF-drenched guitar. The Future Primitives alter between OLD AND NEW, blending and blurring the lines between the two, bending the sound into a shape of its own. SOUTH AFRICA has a small but rich history in GARAGE music (The A-cads, The Gonks, Powerage, The Makeovers etc.) and a fantastic art scene, while being famous for exports such as DISTICT 9 (the film) and Die Antwoord (hip hop crew)... From today, the wind will blow in another direction... three misfits from Cape Town are hitting up straight from their dark rehearsal room into the clubs where all the cool kids go to change the face of South Africas music forever. FEEDBACK ORGIES. FUZZ GUITAR. Direct in Your Face Stomping. Stupid Primitive Drum Beats and Desperate Futureless Screams. This is The Future Primitives. Their name hints at a contradiction that can be heard in their sound as the recordings are stripped of all technological advances, using analogue gear and minimal microphone setups to record live to tape. To them, its more about capturing a feeling.