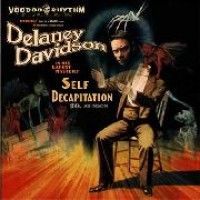 Delaney Davidson...Born in New Zealand in 1972 from that day into music either recording or Live on Stage.. a Restless Soul who travels around the world.. then landed in Bern Switzerland meeting Reverend Beat-Man and Hi Contact with the Voodoo Rhythm Label and their Philosophie .. Joined the Dead Brothers on tours and the two Albums Flamend Herz and Wunderkammer aswell as playing Dreigroschen Oper, in Stadt Theatre Basel, now back and All by Himself as Delaney Davidson's One Man Ghost Orchestra Touring with Holly Golightly (US Tour) Woven hand and Reverend Beat-Man ( US Tour and Europe).For this 1st Full Length Album he Exploded the One Man idea and invited People to Record the album.. that is Mostly Recorded at Outside Inside Studio by MojoMatt Bordin in Montebelluna Italy , then other studios in Wisconsin, San Francisco, and Wellington, New Zealand and Lovelite Studios, Berlin Germany, with Guest Musicians like: Dan (Woggle) Elektro , Reverend Beat-Man, Garage Kid, Fanfare Kalashnikov, Eric McFadden.. Anyway this is a Hi-Cruise into the Weird and Colourful Fantastic World of Mr Suave Delaney Davidson. Musically he's pretty hard to Catch .. he likes too much music, that you could pin him down.. but definitely the Dead Brothers Years were a big influence, then R&B Blues Singers, Songwriter Folk from around the world, Nick Cave, Ennio Morricone... a wierd cocktail of spine tingling mayhem...and and and..