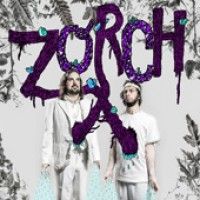 If Zzoorrcchh sounds like a photomosaic looks, it's because there is similarly a meticulously organized logic to it all. When Zac Traeger (keyboards, omnichord, vocals) and Shmu (drums, omnichord, vocals) first started playing together in 2008 while studying music in college in Boston, the pair would improvise and record many hours worth of ideas. Some of these songs are direct descendants of those jams; the duo picking out pieces of those recordings, re-organizing and reworking them multiple times and in various studio settings while also adding on and creating new ideas. Demo versions of some of the songs on this album were previously released, only to again be redone a couple of times over for the album. And, Zorch even previously offered up all of the basic audio tracks from early EPs for fans to remix their own versions. The band are just as intensive about its live shows, often playing upwards of 20 shows during the 4 days of SXSW. Zzoorrcchh kicks off fittingly by easing listeners into their world with a slow fade-in to whirling synths, a stately piano loop and countless layers of sounds comprising "My Joy is Explosion." The minute-long tune immediately segues into the blissfully hyper celebration of life, "We All Die Young." Here, Shmu's rollicking drum pattern that might make Neil Peart's head spin drives Zac's frantic synth arpeggios while several layers of voices sing, "what a day, let's celebrate it/ I want to feel elated." Elsewhere, on "This Is The Way It Goes" neo-rave staccato chords sounding like computer error tones, marimbas and pounding toms meet cheerful vocals singing the song title's seeming lament. "Inopportune Sailing" starts off like a repetitive, perky chiptune from an imaginary 80s video game that morphs into a full-fledged living pop-soul jam. It sounds like Zorch actually beat Daft Punk to the punch at making their own organic recordings sound like vintage song samples. "Zut Alors", a longtime fan live favorite lyrically pokes fun at conspiracy theories of reptilian overlords. The album is a wild auditory amusement park that gets more and more exciting with each visit..