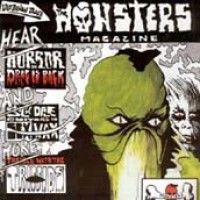 1991 - exactly when MAINSTREAM TEKKNO took over the world and on the other hand GRUNGE and HEROIN GROOVE oriented PUNK ROCK kicked in THE MONSTERS released their 2nd studio Album the Hunch ( a tribute title for HASIL ADKINS) , everybody told them to make good recordings no TRASH CRAP so they thought to do a proper production and went to a proper good recording studio to have a fat sound ( for the 1st and last time)...anyway the studio was way to expensive for the poor TEENAGE PUNK ROCKERS .. they only could afford recording on side of the record in a professional way while the 2nd side they recorded LIVE with Sam from THE RADIOATIONS and Jimi Ochsenbein at a gig they did in 1991 at the ISC CLUB in Bern. That Record was a commercial success for the band and set them on the Music map of the Music world ,the Album got licensed and some songs werereleased on other labels as well.. e.g. the track "Creature from the black lagoon" got released by DIONYSUS RECORDS out of LOS ANGELES and they called their Style of music GRUNGEABILLY!

Losin Streaks
This Band Will Self-destruct In T-minus