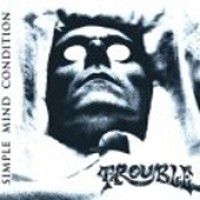 Here we have Trouble, after a long hiatus, taking once more to the skies of metal. A lot of complaints seem to be focused on how unlike every other album they've released this one is. Fat, doomy stomps from Psalm 9 and The Skull aren't present in abundance, nor are the stoner metal speed assaults of the self-titled Trouble, but neither those have been present really since the self-titled came out. Manic Frustration was a good album, no doubt, but a little too hard rock and not enough Doom/Stoner influence for my tastes. Plastic Green Head remedied this problem, but to unimpressive standards and resulted in an even weaker album. This album is a huge step up from PGH in that most of the songs have well-written sludgy stoner hooks, and are drenched in Eric Wagner's woe-is-me penmanship. Eric's singing has changed a good deal at this point, as he can sometimes pull off a scream reminiscent of the 90's era, but his cleaner voice is just as convincing as it's full of emotion. Tracks like Seven (the original title for the album) and If I Only Had A Reason are perfect examples of Trouble's rebirth into the 2000's. The album of course isn't without faults, namely in Ride The Sky, a Lucifer's Friend cover that I'm sure would have been great in Wagner's more formidable years, but just doesn't cut it at this point in the band's career. Closer, Beginning of Sorrows is another beautiful piece worthy of mention. Starting with a piano and Wagner's soulful lyrics, it then transforms into a Doom riff that begs your attention, and finally ends with the full band backed by piano full on breaking into a jam, thick laden with Wagner's poignant vocals. Overall, a very good album. Not a masterpiece, not a misstep in their career, rather a convincing album worthy of at least a listen. Those expecting the past will be disappointed, but those who will give the time to this album will find something to treasure in it.