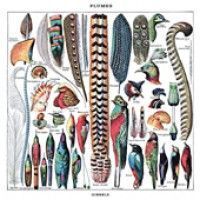 Ginnels is a Dublin-based solo project by Grand Pocket Orchestra and No Monster Club guitarist/bassist Mark Chester, with live friends Paddy Hanna, Bobby Aherne, Roy Duffy and Ruan Van Vliet. Chester describes his gloriously excitable and gorgeous music as "like your favourite Byrds and Feelies records being drowned out by your neighbours stoned noise jams. Except actually good". After releasing two acclaimed releases in 2011, the self titled album "Ginnels" and the mini-album "Mountbatten Class" (Long Lost Records), in 2012 Chester decided to record a 20-song, hour-long, double album called "Crowns", influenced by such sprawling records as "69 Love Songs" "Sandinista" and "Bee Thousand". It was released on double cassette by Long Lost and brought Ginnels much acclaim. "Plumes" compiles a selection of tracks from Ginnels three records plus other online-only releases, and its the first time these tracks are available on vinyl. They were all recorded and mixed entirely in Chesters living room, built up from layers of guitars, vocals, "cheap keyboards and other assorted detritus". The approach and sound recall the glorious jangle pop legacy of the Flying Nun label, early Pavement and Elephant 6 bands like The Apples In Stereo. Over the whole album, from fast-paced tracks such as Heathwaite Wood and Great Fall through to more minimal, reflective moments like Friends Are Dead and Champs, Chesters knack for delivering really strong, memorable melodies never fails to shine and astonish.