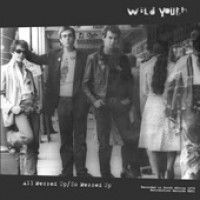 The first release on the new Retrobution records label: Vintage South African punk from 1979 - file under garage. Wild Youth were the first South African punk band and were featured in the great film Punk In Africa. Their first 45 is one of the most collectable South African records ever, and this 500 is likely to become equally sought after. A fantastic slice of punk history!"The revelatory tracks are So Messed Up which sounds like a lost Buzzcocks classic, with an almost-too-stoned-to-play James Williamson wailing away on an out-of-tune guitar." (Ugly Things)