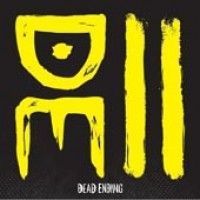 Dead Ending is back with their second release and it's simply brutal. The first laid the foundation, but this EP better reflects the band firing on all cylinders, with all members now contributing songs. DE II sports screaming guitars, thumping bass, pounding drums and a vocalist who makes you crap in your pants as you run for protection. By now, punks should already be familiar with Dead Ending, the fierce hardcore outlet for Joe Principe (Rise Against), Derek Grant (Alkaline Trio), Jeff Dean (The Bomb, Noise by Numbers) and the legendary vocalist Vic Bondi (Articles of Faith). The band has only played one show to date-at the Punk Rock Bowling Festival in Las Vegas-and will be hitting the road in 2013. "Vic's still schooling us." -Vice "Move over, OFF! there's a new generation-spanning, '80s hardcore-influenced band in town." -Exclaim "This is exactly what pissed off, political hardcore should sound like in 2012." -Punks in Vegas

Glove
No Blades No Bones