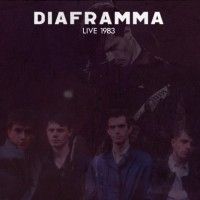 Diaframma were the best italian post punk band of the early 80's. They came from Florence, the city that was the most important center of new wave music of the period (see bands like Litfiba, Pankow, Neon, Moda, Polyactive, Karnak and many others...). In the wake of the English decadent dark-rock, strongly influenced by Joy Division, in 1982 they recorded their first single, "Pioggia / Illusione Ottica" (Italian Records). The beautiful lyrics of the poet/guitarist Federico Fiumani push the group among the most popular on the italian scene of the time. Followed by the split 7", "Circuito Chiuso" (Free/Industrie Discografiche Lacerba-1982) and the Mlp "Altrove" (Contempo-1983), which confirm the remarkable ability of the quartet (Gianni Cicchi on drums, Leandro Cicchi on bass, Federico Fiumani on guitar and Nicola Vannini on vocals). This album contains two great live set recorded in 1983 never heard before. An amazing picture of the greatest italian post punk band ever! Limited edition to 500 copies on GREEN VINYL!!!!!!