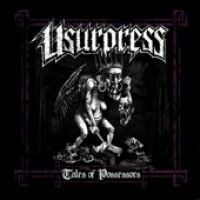 Hot on the heels of their first split EP with fellow deathmongers BOMBS OF HADES, here comes Uppsala's USURPRESS first proper EP. Okay, so one could say that those four tracks aren't exactly new since they were available first a CDr then as a tape as their first demo in 2010 and were "the first four tracks we wrote, simple as that" adds their vocalist Steffe, also of punk warriors DISKONTO. But since it was pressed to respectively only 100 and 55 (!) copies, here's your chance to once again experience the first seeds planted by this death/crust band from Sweden, also featuring Daniel Ekeroth, former INSISION/DELLAMORTE four stringer and currently desecrating virgins and cheap beers alike with IRON LAMB. "We try to mix both styles, our vocals and riffs are coming from the death-metal angle but our drums and song structures are more in the crust/punk vein. That was our intention from the beginning, and still is. We try to use strange/disharmonic chord changes, influenced by VOIVOD and prog' rock, but we also did our best keeping the songs short and to the point. We're probably more connected to the metal scene though and that's fine by us. Our lyrics are definitively stepped in a metal discourse, but they are not gore/horror stories. In short: we are not pretentious enough to be metal and not self-righteous enough to be punk ah!" And with a 12 inches just around the corner, and both a split with PYRAMIDO and a debut full-length to follow, this is just the beginning. Swedish D-beat reigns supreme!!!

Choked By Your Own Vomits
Shit World

Amputation
Slaughtered In The Arms Of God