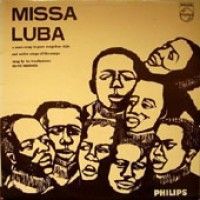 The original 1958 Congolese version of the latin mass MISSA LUBA by Troubadours Du Roi Baudouin (featured in the movie 'IF') Hailed by Stanley Kubrick as "Absolutely, one of the great films", Lindsay Anderson's stylish, surrealistic, uncompromising and confrontational film IF... encapsulated the revolutionary atmosphere of the sixties; and five decades on has lost none of its power to astonish and provoke. Malcolm McDowell, suggested the bewitching, other-worldly music of 'Sanctus' from the "Missa Luba", a version of the Latin Mass based on traditional Congolese songs, which establishes the film's very particular atmosphere. IF... captured the public's imagination and the memorable 'Sanctus' subsequently became a chart hit . Les Troubadours du Roi Baudouin, a choir, with percussion section, consisting of about 45 boys from 9 to 14 years old, and 15 teachers was formed by Father Haazen. The "Missa Luba" is pure Congolese. It is completely void of any modern, western musical influences. None of it is written. Certain rhythms, harmonies and embellishments are spontaneous improvisations