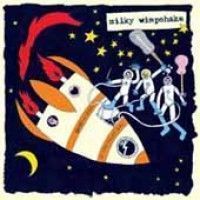 500 only LP.Recorded in a single day, it consists of 15 more songs from the pop/punk chocolate assortment box which the band have raided for so many years: love songs, silly songs, all set to a basic guitar buzz and kick drum combo. The album bristles with spontaneous excitement due to the success of the live recording with no overdubs, giving Heart And Soul In The Milky Way a much rawer, yet fresher feel than their previous albums, with the likes of "Worthless Person" veering towards Billy Childish garage rock territory. Milky Wimpshake have produced the strongest set of songs of their career from the subterranean homesick opener 'Chemical Spray', with its arbitrary rhymes and taking-the-piss guitar break, the innuendo-laden 'On Top', full of maudlin indie-pop melodicism and the closing duet 'Without You'. While the majority of the album features compositions by frontman Pete Dale there are two covers, including a punked-up version of 'Lah-Di-Dah', a song by Jake Thackray and a version of 'Omnia Mea Mecum Porto' by North East underground group Les Cox (Sportifs).

Tacocat
This Mess Is A Place