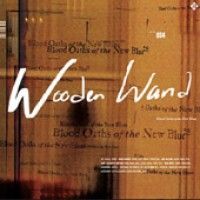 Blood Oaths Of The New Blues is the Sunday morning 'wake and bake' record to last year's critically acclaimed Briarwood LP's Saturday night revelry. With his once-every-five-years proper rock and roll record out of his system, James Jackson Toth - AKA Wooden Wand - retreated back to Alabama to record this spooky, heady follow-up, an album that demands close attention. This is music for quiet reflection and shares a worldview more in line with noise and doom metal artists than it does summer of love casualties and beach burnouts. Every Wooden Wand album trounces expectations, and Blood Oaths Of The New Blues, thankfully, doesn't break that trend.David Hickox, Janet Elizabeth Simpson, Jody Nelson, Brad Davis and Les Nuby III make up the band, and it's a testament to their versatility to note that this same group who pulled off slow-burn rock epics like "Motel Stationery" and Stones-y, soulful jams like "Big Mouth USA" last time around could so artfully and effortlessly create a follow-up that does not contain a single guitar solo, snare hit, or country affectation. Harmonium, organ and disembodied vocals are the order of the day here, with back-masking and subliminal messages added to enhance the trip. Blood Oaths Of The New Blues represents a break with the past with an eye on an uncertain future, and is the boldest, most adventurous and most intensely personal album of Toth's long career. The new focus on texture and sonic space does not, however, come at the expense of Toth's inimitable lyrical style. For proof, see the "alt couple" travelogue of "Outsider Blues," the menacing firsthand account of the real-life Doherty Gang's crime spree in "Southern Colorado Song," or the suicidal yearnings of "Supermoon (The Sounding Line)." Elsewhere, Toth evokes the weary spirits of state-executed men and women in "Dungeon Of Irons. This is the first Wooden Wand album that should equally satisfy both the fans of Toth's acerbic rambler narratives as well as older fans who miss losing themselves in the fried, psychedelic atmospheres of albums like Buck Dharma and Harem Of the Sundrum & The Witness Figg.